Not on This Night - A Stage Wright Film ON DEMAND 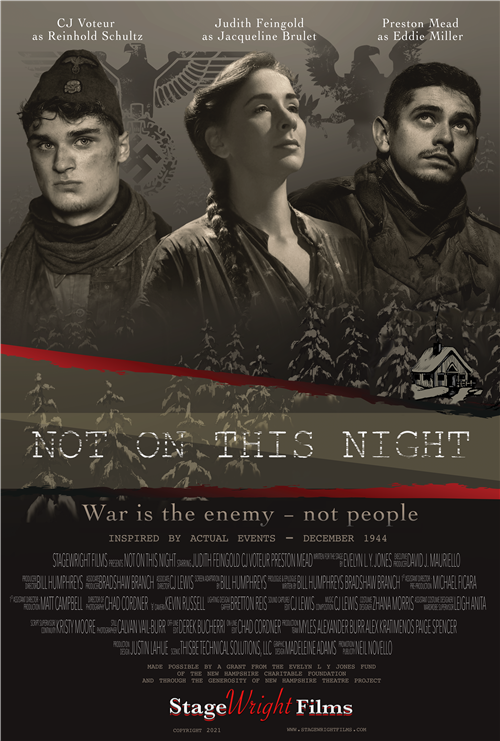 Not on This Night

NHTP company artist and StageWright Film’s co-founder Bill Humphreys is at the helm of the new feature production, Not On This Night, the screen adaptation of the play by Evelyn Jones.

Many might remember the story of the World War I Christmas Truce in 1914 when Allied and German troops along the Western Front laid down their weapons and celebrated the holiday through shared songs, stories, games and improvised gifts.  While it is perhaps a  more widely known story, having been retold numerous times in film, literature, music, and television, this lesser-known tale, based on a real WWII incident,  is no less inspiring.  Set in 1944 during World War II near the French/Belgium border in the Ardennes Forest, this compelling story and these unforgettable characters remind us that humanity exists and overcomes even the harshest, unimaginable circumstances.

The story centers on a chance encounter between enemy combatants in a small farmhouse, the home of a young French woman, Jacqueline Broulet, in the Ardennes Forest on Christmas Eve 1944.  As the Battle of the Bulge has been raging around her for weeks, Jacqueline unexpectedly finds herself sheltering and tending to two young, wounded soldiers, one American, Eddie Miller, and one German, Reinhold Shultz, who have been lost in the woods after being separated from their units.   As the night passes, enemies see themselves as human beings.  Humanity prevails, even in the bloody, wretched depths of war.

For more information about The Battle of the Bulge and soldiers’ experiences presented in the Pre-Production preview video, click here to read the account from the National Archives.

Not On This Night
is made possible by a grant from the
Evelyn L.Y. Jones Fund of the
New Hampshire Charitable Foundation