November 15 - December 1, 2013 – Six Characters in Search of an Author by Luigi Pirandello
Now considered one of the most influential plays in the history of world literature, this extraordinary script incited audience riots at its 1921 premiere. Pirandello shows how illusion mixes with reality, and how people see the same thing in many different ways.

January 10 - 26, 2014 – Finding the Prince by Genevieve Aichele, CJ Lewis & Shay Willard
Finding the Prince follows three soldiers and one journalist who have crashed in the desert during a nameless war. As they struggle to survive, they begin to read a tattered novel given to one of them by a dying soldier. Each character begins a journey towards coming to terms with their own “little prince,” the deepest, sweetest part of us who knows that “what is most important is unseen.”

May 16 - 25, 2014 – Arsenic and Old Lace by Joseph Kesselring
Presented by the Senior Repertory Company, Arsenic and Old Lace is the zany story of Mortimer Brewster, his brother who thinks he's Teddy Roosevelt, and his adorable two aunts who have a knack for charity work (or murder by another name).

September 22 - October 4, 2013 – Dreaming Again by Genevieve Aichele
A two-week tour, with 19 performances at 17 schools and community organizations around New Hampshire. Dreaming Again features the stories of New Hampshire immigrants and refugees over the past 100 years

2014 INTELLIGENT THEATRE FESTIVAL
Back by popular demand, The Intelligent Theatre Festival is expanding to two weekends of provocative scripts and screenplays. The ITF offers audiences a chance to hear and discuss interesting, thought-provoking plays that might not otherwise be produced in the seacoast area.

Weekend 1: Women Who Break the Rules
March 21, 2014 – Mrs. Warren’s Profession by George Bernard Shaw
Written in 1894, Shaw’s feminist play was shocking in its portrayal of a woman going into business for herself.
March 22, 2014 – The Clean House by Sarah Ruhl
A bittersweet comedy about a Brazilian maid who wants to be a stand-up comic, the gifts of cancer, and the vagaries of love.
March 23, 2014 – Lettice & Lovage by Peter Shaffer
Genevieve Aichele and Kathleen Somssich read Shaffer’s hilarious comedy about a tour guide who makes up alternative history.

Weekend 2: Deadly Games
March 28, 2013 – The Laconia Dodgers by Michael Fischer
A new comic screenplay about students in the early 70s whose college escapades are overshadowed by the possibility of being drafted to fight in Vietnam, and the different choices each one makes.
March 29, 2013 – The Deadly Game by James Yaffee (based on Trapps by Friedrich Durrenmatt)
In this engrossing mystery, an American traveling salesman is caught in a bizarre game when three retired men of law in Switzerland amuse themselves by prosecuting strangers who drop in.
March 30, 2013 – Prion by Tom McCarren and Dennis Kleinmann
Part science fiction, part teenage coming-of-age story this exciting screenplay has been a finalist in the Vail Film Festival, Cinequest Film Festival and NH Film Festival, and won an award at the 2013 New Hope Film Festival. 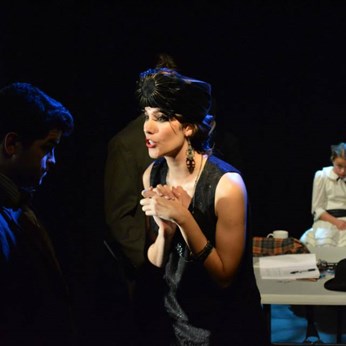 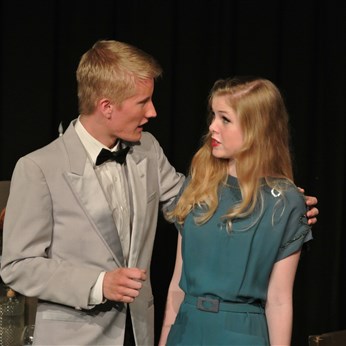