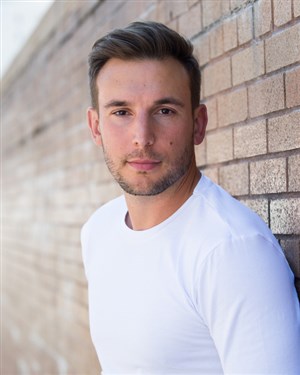 Drew DeSimone is an actor and screenwriter who returns to Portsmouth from Brooklyn, NY after attending UNH as an undergrad. Drew’s TV & Film credits include The Cars that Made America, Primal Instinct and Knives Out. He’s also
enjoyed performing in black box, improv and sketch-comedy productions in New York and Seattle such as Everybody Here Says Hello, All in the Timing and several Upright Citizens Brigade (UCB) shows. Drew’s writing explores mental health, upbringing, and our relationship with the natural world, and two of his screenplays, Galapagos (or The Era of Hopeful Monsters) and Markus are currently in development. Drew is also Chair of the Kurt Vonnegut Museum’s 2021 Programming, Good Earth: Vonnegut & the Environment. He has a Ph.D. in Astrobiology, and prior to becoming a filmmaker, as a NASA Fellow at the University of Washington, he studied the microbiology of deep-sea hydrothermal vents as a proxy for investigating the evolution of life on Earth. He then spent ten years working around the world as an executive in the Bio Tech and Sports Business industries, and he continues to consult with companies on marketing and
business development strategy today. Drew has studied acting under Josh Pais (Committed Impulse) and Seth Barrish at The Barrow Group, Improvisational Comedy at UCB, and Meisner under Robin Lynn Smith at the Freehold Theater. Drew is also a passionate primary education and animal welfare volunteer who has taught classes from elementary school to college, and spayed and neutered thousands of cats and dogs in North and South America.

NHTP’s reputation inspired me to get involved with the company. There are many challenges that face us today, and I feel a responsibility to try and effect positive changes in our society. The youth, community and professional development
opportunities offered through NHTP are chances for us to do just that. Through theater arts we can support and celebrate the diversity and uniqueness of human beings while honoring the experiences that we share. It’s my honor to join NHTP’s commitment to equality, education, healthcare and the environment.
About Us